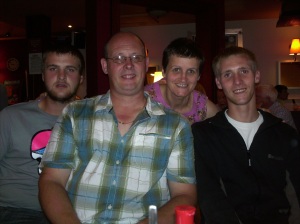 This is me with my hubby, Steve, and our sons, Tony & Stuart.  The photo was taken at my birthday meal 7 years ago. 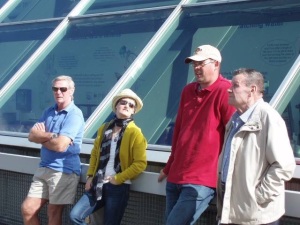 My Mother always wanted to go to The Falkirk Wheel.  My cousin Liz, was visiting from Oz in August 2013 – this was to be a family outing that we were all looking forward to.  Sadly Mum passed away two weeks before her niece/goddaughter arrived. As a family we had a day out at the wheel.  This photo was taken by Liz.  It’s me, my hubby, Steve, my dad and liz’ hubby, Bob.  Mum was sorely missed that day. 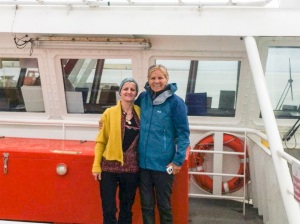 Me and my namesake – my sister/cousin Liz.  On our way to Orkney in 2013.   We went on this trip against medical advice – I had a capsule camera inside me that had gone awry – all good – four days later I passed it.  We had a wonderful time, this is a place I yearn to go again.  We Visited Orkney one month after the death of my beautiful Mum. 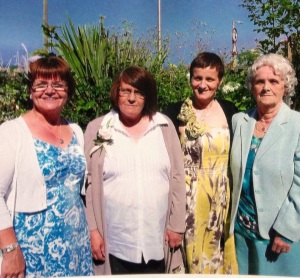 This was taken at the wedding of James & Kim at The Quay in Musselburgh – August 2012.  mum, hazel, Helen and me.  Beautiful day. 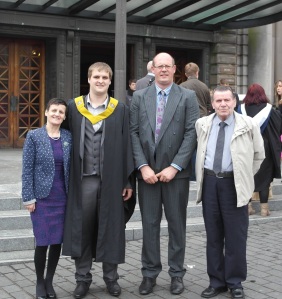 Stuart’s graduation in Media Design.  Steve, Dad, Stuart & me outside the usher hall in Edinburgh.  September 2013 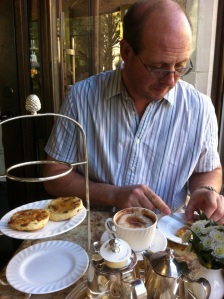 Steve in Auntie Bessie’s Tea Room in York.  What a feast we had 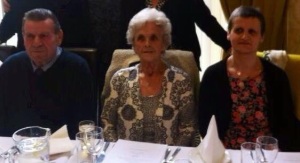 Mum, dad and me at their diamond wedding anniversary meal.  April 2013.  Sitting at my Mothers side I felt so comfortable.  At the meal there was my parents, my hubby, my two sisters their husbands, my two brothers and their wives.  My mum had trouble with her breathing and was slow in walking, but I would never have thought she would have left this earth 4 months later.  Mum was diagnosed with lung cancer nine and a half years previous.  She gave up smoking instantly, undergone major surgery – a lobectomy.  She was very brave.  Mum fought hard.  Her reward for not smoking and fighting the cancer with all her might was a further nine and a half years of life.  I know I’m biased but my mother was a kind happy lady, she lit up a room when she walked in.  I could tell her anything, I still talk to her when I’m alone.   When mum was here I spoke to her everyday, that’s what I miss most – the phone call in the morning.  The one where we would exchange stories and both tell long winded tales.   My heart still skips a beat at the sound of the telephone ringing before 9am.  I’m the youngest of five, mum had time for us all.  She gave us all advice, love and reassurance.    My mother had a big heart and had time for everyone.  She had many friends.   Mum and dad travelled- loved their holidays together and always came home

with additional names in the address book.  She loved music and often you would walk into the house and mum would have the hifi on and she would be singing at the top of her voice.  At a party mum was always on the dance floor.  Mum wasn’t a complainer – I guess that’s probably why we didn’t realise how Ill she was.  When mum was admitted to the hospital for the last time it was the day before my birthday.  Her oxygen sats were low at 75.  Her blood tests were not good.  The doctor was blunt and told us it was highly unlikely that she would get home.  The day of my birthday the rest of the family visited in the afternoon and left Steve and I to visit in the evening.  Steve got a pick and mix.  Mums eyes lit up.  Oh I fancy that cola cube she said.  Perched on the edge of the bed mum sucked the sweetie.  She sucked the flavour and enjoyed it – then Steve took a napkin and held it to mums mouth – mum dropped the sweetie out and smiled.  I enjoyed the the suck and flavour, just can’t swallow the damn thing.   Mum looked ill, old and fragile – far from the well groomed lady that I was used to seeing.   Mum placed her hand in mine ‘you look tired babe’ she said, ‘you need to get her to bed Steve’.  ‘I’m fine, I’m more concerned how you are’ I answered.  ‘Nonsense, I’m just old and ready for a new place, and you’re not well’ mum chipped back.  That’s the kind of mum I had, putting us first right to the end.  Up until about a year before my mum died my mum and dad accompanied me to some of my hospital appointments.  Once I got put on the octreotide treatment injection some of my symptoms improved – the first time my mum saw my consultant after this in the cafe In the hospital she went up to him and shook his hand and thanked him for everything he has done for me.  He was beaming.  We sang on the way home In the car that day.  I miss my mum so much. 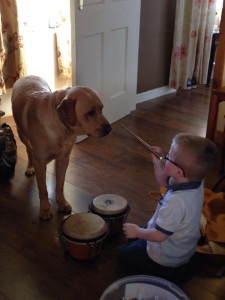 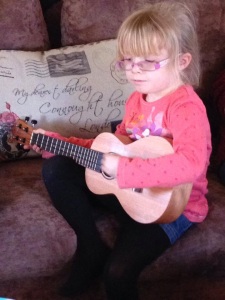 Louis & Sophie enjoying performing some musical entertainment at ours.   Buddy is loving listening to Louis playing the whistle.  Music is a big part of our lives. 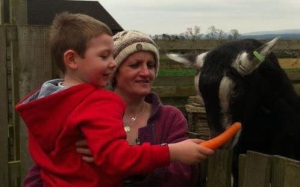 Jack and I give Poppy, our British alpine goat a carrot. 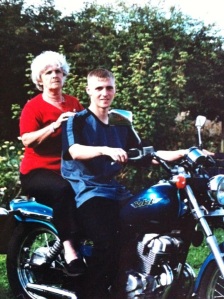 My mum tries the back of Tony’s motorcycle for size.  2004 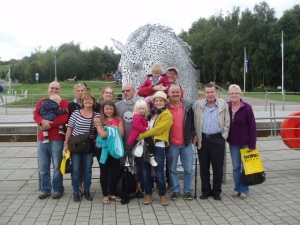 The family at Falkirk Wheel.  September 2013 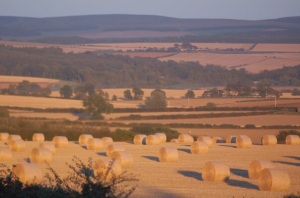 The view from my bedroom window 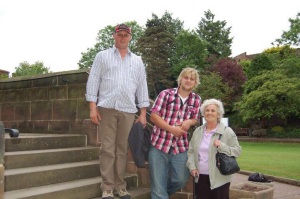 On holiday –  Steve, Stuart and mum in Wales. 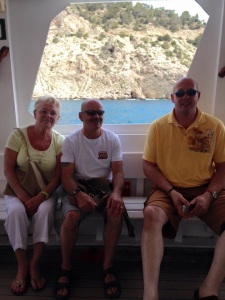 Steve, Brian and Margaret on the ferry from Ibiza town to Cala llonga.  We had a fantastic holiday together.  Brian and Margaret shared many of their personal experiences of the island with us – for that I cannot thank them enough 😀 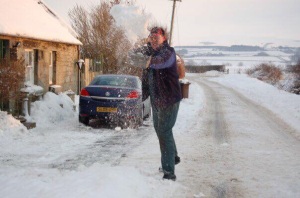 Steve having fun in the snow outside our house 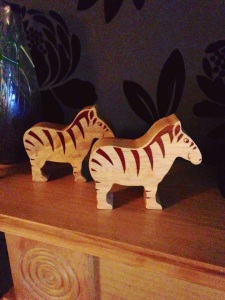 Steve was out at work.  Whilst he was at a coffee stop he noticed these wooden zebras.  He bought them for me.  They have pride of place of my fireplace. 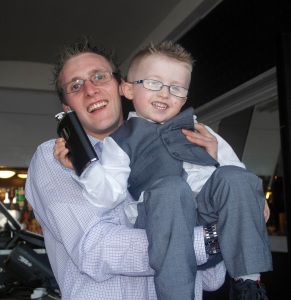 Tony and Louis on Easter Sunday when the children were christened.  Tony is Louis’s God Father.  The priest did a beautiful service.  Louis has many mannerisms similar to Tony.  They idolise each other and I believe will be there for each other for all their lives.  Louis asked his mum Lindsay the other day what i did when I worked.  When she told him, he replied with I think my auntie loves Lizzie should be an artist – she would be great at it.  I havent asked what his reaction was the career I did follow and I’m not too sure what he would make about me talking about testicles and once in a national newspaper being referred to as ‘The ball lady’ 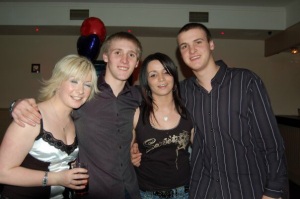 Cousins.  Taken at Lindsay’s 21st birthday party.  These four look out for each other. Talk, text and visit one another. 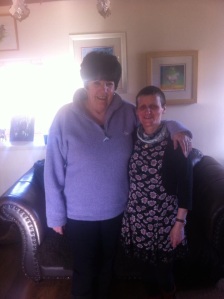 This is me and Elaine.  Elaine is from Cornwall, she has neuroendocrine cancer and carcinoid syndrome.  I met her through social media.  We first started chatting on Facebook.  When Elaine was visiting relatives 80 miles from my home whilst on holiday we arranged for her to come over to mine for a spot of lunch and a blether.  Despite chatting online we had so much to talk about.  Time sped by.  This was the start of a beautiful friendship. 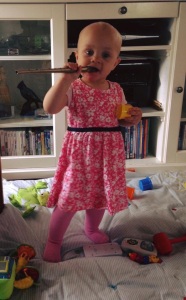 Grace has a go at entertaining by playing a tune on the whistle. 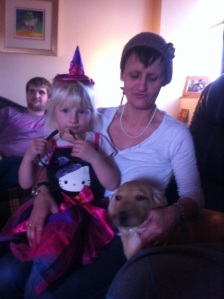 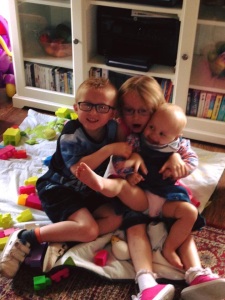 Kiddies visiting and playing:  house filled with joy and laughter.    Such a tonic 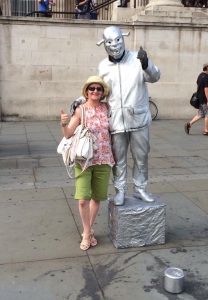 One of my new found friends in London. 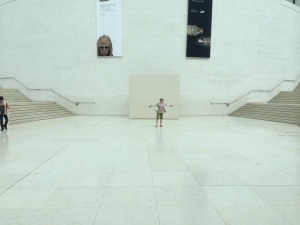 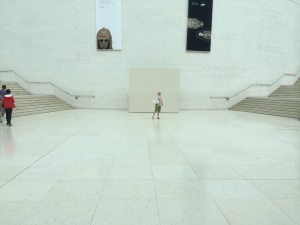 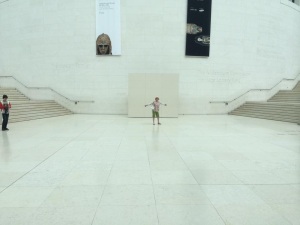 When in London .  As well as attending the hospital in Edinburgh and seeing a very good Net specialist.  I get seen by Professor Martyn Caplin at the neuroendocrine tumour unit at the Royal Free Hospital in London.  Steve and I try and make the best of every situation.  It’s tiring travelling – we take in an extra day or two and visit some sights.   We usually travel the 400 miles by train. 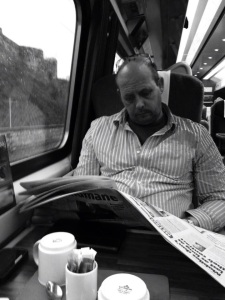 Steve relaxes on the train.  Only 5 hours door to door.